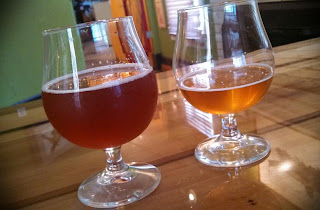 Last week, we introduced the idea that craft beer isn't all about one ingredient or one quality. Style, though sometimes a beneficial guide, has become a trap for many, new and old alike. Those new to the craft might believe they hate IPAs because of the "bitterness" of hops. More seasoned experts might forget that if we can't convey what we mean, we descend into repeating ourselves over and over again.

To continue further in this style series, we'll be comparing beers of the same style in the coming months. We hope this will bring a sense of clarity to our drinking experiences. Even better, we hope it will provide a way to talk about beer--beyond all the catch phrases and the gimmicks. No fancy artwork, no slogans, no manufactured rarity. Beer, just beer.

Continuing with our example of IPAs--and since our IPA Festival is right around the corner--we've chosen two of our own in this style: Dunedin Brewery's IPA Chronicle 9 Indian Amber and the American Classic IPA.

Let's start with the obvious: those damn hops! The Classic IPA has a distinct taste of white grapefruit that is effervescent, juicy, yet dry and refreshing. This is the bitterness of Chinook hops interplaying with the aroma and flavor of Centennial & Cascade hops. The Indian Amber utilizes Nelson Sauvin hops & Crystal malts, dropping the dryness in exchange for chewy caramel and a note of toasted oakiness that follows up with the comparative tropical flavor of roasted pineapple. Nelson Sauvin hops are from New Zealand and regional conditions account for a difference in taste.

The appearance of the Indian Amber is a reddish-amber with a thin white lace across the top. It isn't cloudy like the Classic and it doesn't have the light ruby center like the Classic does. However, the Classic's noticeable cloudiness is equally appealing.

Each has a bitter fizz, but the Indian Amber ends with a zing, almost like the feel of pepper, which provides a nice contrast between the two. Both hold their respective ground, but both are from distinctly different traditions. Think of your grandpa's breakfast of handpicked grapefruit with a side of mango jam on a soft roll vs. island picnic grilling before a refreshing swim.

IPAs and hops are diverse, somewhat akin to the world of coffee, where differences can be many. Like two coffees, these two beers take different approaches to style. One is classic in the sense that it utilizes three of the most popular American hops; the other is our take on a Red IPA (or Imperial Red), furthering the exploration in our Chronicle Series. If you like something chewy and robust with tropical fruit and cherries, the Indian Amber may be for you. If you prefer refreshing and dry with grapefruit and sharp apples, the Classic IPA may be more up your alley. It goes without saying, we prefer both.
Posted by Sailor on Tuesday, May 21, 2013