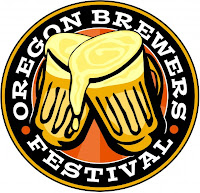 What a trip it had already been when we arrived back in Portland for the 25th Annual Oregon Brewers Festival. We returned on Wednesday, the night of the Brewers BBQ hosted on the waterfront--the same venue as the festival. We were given pint glasses & choices of fills from 20+ great beers from Oregon, mostly IPAs & sours. All beers were outstanding.

At this time in our trip, we were also joined by more invading Dunedinites, including Matt & Amy Barnett, Michael Norman Bryant, Jimmey Defrank (Lueken's Liquors), Mandy Boldman, Jamie Barnett, & Devon Kreps (Seventh Sun Brewing Co). This made for a great presence of what beer in Dunedin is all about, enjoying good beer together & enjoying the company of others. We followed the Brewer's BBQ with a visit to Cascade Brewing's Barrel House, who also happened to be our first stop in the morning for the Festival Brunch & Parade kick-off. Breakfast was served, as was delicious Cascade Brew. Most of us started with an Oblique Coffee Porter, a great way to start the day.

From Cascade's Barrel House, 800 brewers & beer-lovers took to the streets for a parade led by 2 large wooden casks filled by the Cascade, the host brewery. Filled with beer-themed costumes & the Transcendental Brass Band, the parade walked one mile (and across the Morrison Bridge) to the downtown waterfront where the wooden casks were ceremonially cracked open. One was filled with IPA, the other with Gose (a historic salty-sour brew). After the free pours from the casks, the festival was underway & the public started to fill in.

Once the beer started flowing at the festival, we wandered over to the trailer pouring our IPA Chronicle 6: FL-Oregon Trail, brewed with FL orange blossom honey & sweet orange peel. When we got there, we were floored by the epic line trailing away from the tap. At this point, we realized that Portland was full of beer drinkers who pay attention. Our line was one of the longest throughout the weekend & everyone we spoke to thoroughly enjoyed our brew. Not only were we the only beer from the Southeast, we were the hoppiest beer at the event. Here's some shots from our beer line:
Each day of the festival, our beer ran dry. The festival allots a certain amount of kegs per day to ensure that each beer pours at the start of the next day. Our kegs blew early each afternoon, alongside other great beers by 10 Barrel, Cascade, Russian River, Old Market Pub & more. Beyond the main 84 beers (one per brewery) pouring, there was also a Buzz/Sour Tent which rotated through kegs all weekend. We decided the best way to show Dunedin's love for beer & community would be to pour a keg of our collaboration with Seventh Sun Brewing (Dunedin, FL), The Sun & The Sword, a Nelson Sauvin single-hop berlinerweiss. This gave our friend & co-owner of Seventh Sun, Devon, a good reason to fly out & join us for the festivities. She had a blast as well!


Our next Blog post will wrap up the FL-Oregon Trail with a glimpse into our drive home, including visits to Rogue, Sierra Nevada, & Lagunitas. After that, keep an eye out for a short film edited from the footage we captured during the entire trip. Till then!
Posted by Mike Bryant on Wednesday, August 08, 2012